The Irish Legal History Society aims to publish on average one book per annum, which is sent to all members free of charge. Here you will find details of some of our recent book launches.

This book was launched by Ms Justice Úna Ní Raifeartaigh of the Court of Appeal at a reception at DCU on Tuesday 21 January 2020. The event was well-attended by academics from a number of disciplines including law, history, translation studies, Irish studies and linguistics.

Professor Dorothy Kenny from the DCU School of Applied Language and Intercultural Studies welcomed attendees and the interdisciplinary and ground-breaking nature of the research was highlighted by Professor Patrick Geoghegan, President of the Irish Legal History Society. Ms Justice Úna Ní Raifeartaigh spoke about the position of the Irish language in the State and in the courts, noting the continued relevance of a number of themes running through the book.

Dr Mary Phelan is a lecturer in the School of Applied Language and Intercultural Studies (SALIS)  at DCU. She is the chairperson of the Irish Translators’ and Interpreters’ Association and her research is in the field of Translation Studies, particularly historical provision of court interpreters and contemporary provision of interpreters in courts, police stations, hospitals and other settings.

The book is available for purchase directly from Four Courts Press, and is supplied free of charge to all ILHS members.

The Case of Ireland’s Being Bound by Acts of Parliament in England, Stated.

January 2019 saw the launch of Patrick Hyde Kelly’s edition of William Molyneux’s The Case of Ireland’s Being Bound by Acts of Parliament in England, Stated.

Regarded as the most celebrated Irish political pamphlet published before 1801, William Molyneux’s Case of Ireland, stated (1698) was written to demonstrate that English statutes did not have force in Ireland until they had been re-enacted by the Irish parliament. The book was launched at Iveagh House  on Friday 25 January 2019  by Professor Ian MacBride.

The book is available for purchase from Four Courts Press, and is free to members of the Society.

These books were launched at a special event at the UCD Sutherland School of Law on  30 January 2018 by Professor Hector MacQueen of  Edinburgh Law School.

We were delighted to launch our most recent publication at Books Upstairs, Dublin, on Thursday 8 Oc

Judge MacMahon was well-placed to review this publication as a former judge of the High Court and Chairman of the Board of the Abbey Theatre. He spoke enthusiastically about the book and strongly recommended it top anyone with an interest in law, theatre, literature,or history generally.

The book considers how drama, opera, ballet, circuses, concerts and puppet-shows have faced innumerable difficulties in Ireland. The challenges that are the focus in this unusual study are those that touched on matters of law.

Censorship and of riot, safety of buildings, performers’ contracts, dramatic authors’ performing rights, liquor licensing all merit attention too, as, indeed, necessarily must the issue of the lawfulness of any ‘theatrical’ activity itself, given the ill-defined powers of the Irish Master of the Revels (1638–1830) and the controls exerciseable under the Dublin Stage Regulation A

Professor Osborough explained that the idea for this book had originated while he was conducting research for Law and the Emergence of Modern Dublin: A Litigation Topography for a

The launch was well-attended by members of the Society and others with an interest in law, literature and theatre, and Books Upstairs provided a marvellous venue. Books Upstairs  is an independent bookshop and literary venue in Dublin city centre, and home to the Dublin Review of Books. 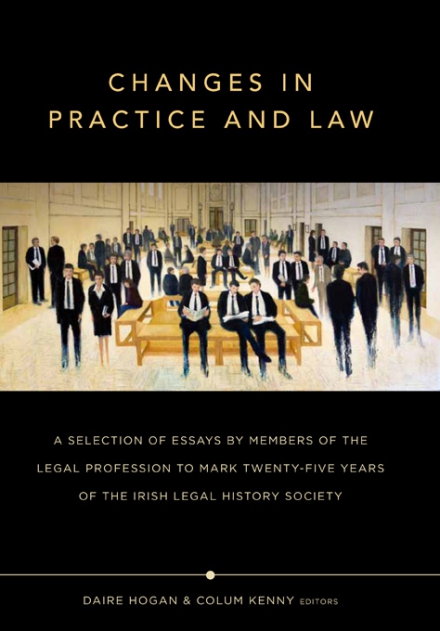 The book, an edited collection of essays, was launched by Mr David Ford MLA Minister of Justice, at a reception in the Long Gallery of the Parliament Buildings, Stormont.

Both volumes were launched by Professor James Kelly at the National Library of Ireland on 18 September 2013.